The past few weeks have seen some break ups ( Radio & Records, Performing Songwriter) and shake ups ( Paste Magazine‘s appeal to readers), while other e-zines and print mags have gone about their business with new issues. Two that stand out are the premiere and spring issues of Blurt (in print) and The Oxford American #10 (which includes a two CD set to be discussed further in another column). 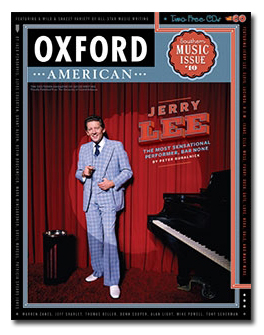 Within the pages of Oxford American’s Southern Music Issue you will find a stellar cast of music critic/writers as Alan Light, Chet Flippo, Greil Marcus and Peter Guralnick. Some of the subjects like Neko Case, Love… with Arthur Lee and Jack Teagarden get double treatment with two contrasting stories a piece. 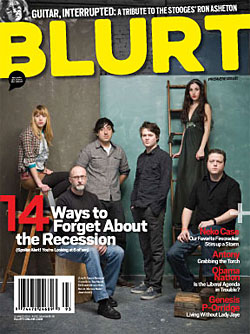 In its debut print issue, Blurt contains a fine how do you do from the editor in chief, Scott Crawford plus a reintroduction to the dedicated editorial staff, a cover story on “14 Ways to Forget About the Recession”, features on Heartless Bastards and Anthony & the Johnsons, a heart felt piece on the late Ron Ashton by Tim Stegall (while Lux Interior is the spring issue’s “In Memorium”), and more Neko Case for those who need it. The prolific Robyn Hitchcock graces “Famous Last Words” (Blurt‘s back pages).
Much like The Oxford American, the glossy print versions area bound to be keepsakes at $12 a year. And, of course, the online mag updates daily. Presently, there is a nostalgiac piece on the 38th anniversary of the Fillmore West’s closing.

Perfect Sound Forever editor Jason Gross, who has a copious in depth article on ’70s psychedelic blues jam band The Insect Trust in The Oxford American, has the latest issue of his e-mag up. This installment features pieces on 360 deals and vinyl resurgence as well as an extensive interview with pre-punk music empressario Danny Fields and another with Velvet Underground engineer and unoffical co-producer, Norman Dolph by Richie Unterberger. The latter is exerpted from his upcoming, comprehensive book about the band, White Light/White Heat: The Velvet Underground Day-By-Day. Unterberger, author of eight other tomes is a cheif music reviewer for AllMusicGuide.com.

PSF also boasts the most comprehensive interview with Richard Meltzer (other than our own, of course). And speaking of Mr. Meltzer, be sure to check out Mike Watt’s latest podcast with him as a guest on the Watt from Pedro Show.

One thought on “We’ve Got Issues”