Another new book I’ve been meaning to mention here is Dorian Lynskey’s 33 Revolutions Per Minute: A History of Protest Songs. Haven’t seen the book yet (wonderful cover!), and I confess to feeling a wee bit skeptical about the subject itself. Though not incurious.

From Sean Wilentz’s recent review in the New York Times:
“In end, Mr. Lynskey can’t help noting, the protest song is nearly an extinct art form; few mean nearly as much as they once did. ‘I began this book intending to write a history of a still vital form of music,’ he says. ‘I finished by wondering if I had instead composed a eulogy.’ If the Bush years didn’t provoke scorching and popular protest songs, he asks, what could?” 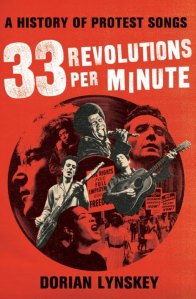 My skepticism about “protest music” has less to do with the music itself — or rather, with the tradition of protest, as a formal concern within popular music (a tradition I do find quite interesting, by the way) — than it does with the critical reception of protest music. Specifically, I mean, with the idea (the fallacy?) that protest music is considered most effective when it has some specific, desired effect, or social impact. That the optimal way to experience songs like “Fight the Power” or “War” or “Mercy Mercy Me (The Ecology)”* is through the prism of some (always well-intentioned, often impossibly vague) desired outcome. I don’t know — there’s just something about the way we talk about “protest music” that, for me, often renders it extremely uninteresting. (It’s for this reason that I tend to subscribe more readily to Chuck Eddy’s ideas of the “accidental” in pop. Protest in music is often where you least expect it, etc.)

None of which may have a damn thing to do with Lynskey’s book. The thing is 864 pages long! I’m sure he’s thought well beyond all my pitiful concerns here.

* Love Marvin Gaye, but worst use of parentheses in a pop song ever??