“This record is not for parties/dancing/background romance. This is what I ment by ‘real’ rock, about ‘real’ things. No one I know has listened to it all the way through including myself. It is not meant to be. Start any place you like. Symmetry, mathematical precision, obsessive and detailed accuracy and the vast advantage one has over ‘modern electronic composers.’ They, with neither sense of time, melody or emotion, manipulated or no. It’s for a certain time and place of mind.”
– Lou Reed, liner notes to Metal Machine Music

“I think that, in this time of recession/depression

and with the whole music business tightening

its belt, it is truly thoughtful of Lou to cut recording

costs as much as MMM must have, especially

when you consider the stupefying self-indulgence

of so many of today’s rock ‘masterpieces’ with their

turns to tinsel. Only James Brown, I think,

studio time. MMM is actually, far from some

Or more precisely, two since it is a

– Lester Bangs,
“The Greatest Album Ever Made”
CREEM (1976)
{available in full here} 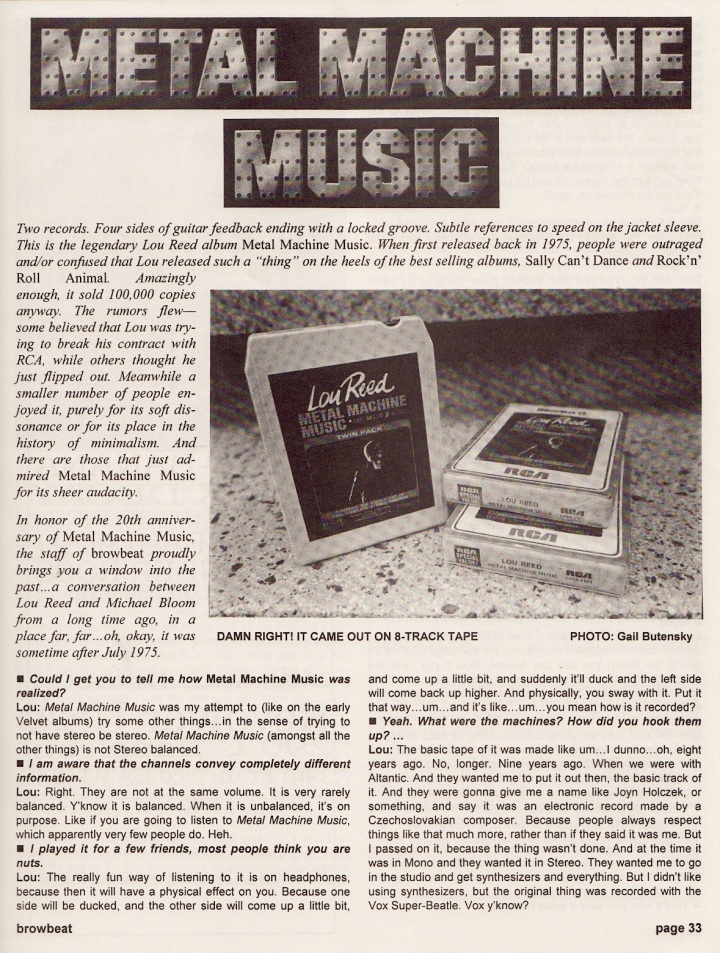 “The fact that he somehow made us all listen to this hour of feedback over and over, literally crawling into the speakers, trying to catch a glimpse of the hidden Evil, the outspoken cruelty of such a venture and the redeeming quality of living through it, while Lou obviously didn’t care about us or this release, proves in retrospect what a tremendous impact the man had on me.”
– Alexander Hacke, No Sell Out (The Wire, Nov. 2013)

“Well, I have. Played it, that is. Once. Which is one of the better feats of endurance in my life, equal to reading The Painted Bird, sitting through Savage Messiah and spending a night in a bus terminal in Hagerstown, Maryland. Yet, when my turntable mercifully silenced Lou Reed’s cosmic scrapings, I felt no anger, no indignation, not even a sense of time wasted, just mild regret.”
– James Wolcott reviews MMM in Rolling Stone 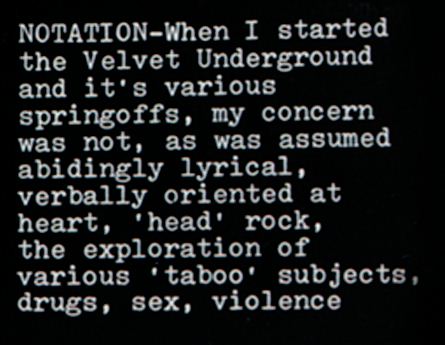 “When Sally Can’t Dance sold well, Reed rubbished it himself (“I was imitating me”). And he bleached his hair, cropped and shaved a cross into it, and put out Metal Machine Music – The Amine B Ring. ‘An act of despicable elitism,’ wrote Ed Ward. Reed insisted that MMM stood comparison with Xenakis: four sides of screaming process-electronics, each exactly 16:01 minutes long. RCA put it out as a standard Reed release and suffered the consequences. Withdrawn within two weeks, it immediately becoming a rite of overamped passage for the true Lou fan, the prize, behind the feedbacking fuzz-drone, a dancing moiré of overtones, delicate and endless.”
– Mark Sinker, “Contract Breakers,” 2007 (The Wire)

“As a chronically-depressed person, I find that Metal Machine Music actually does convey my mood at times. If you listen for a while, you can almost make something out of the din. I played a few seconds once for a co-worker (who moonlights as a singer), and she said it sounded like dinosaurs roaring, which I guess it does at that. At low volumes, the album can be almost soothing. Something about my brain likes the constant droning sound. I can’t sleep if my room is absolutely silent. That’s why I keep an electric fan going every night, even during the winter. I need the reassuring, constant hum. If nothing else, Metal Machine Music certainly comes in handy on the train, as it helps to drown out the sound of other passengers’ cell phone conversations.”
– Joe Blevins, “Metal Machine Music: Why I sorta like one of rock’s most infamous albums“

“The fact is, I haven’t listened to Metal Machine Music since coming to the UK thirteen years ago, but I remember it as quite listenable, in a post-rock ambient way, despite its notorious reputation. Sonically, the tape was surprisingly resonent and with the added bonus of the 8-Track’s permanent loop, I reckon it was an ideal MMM experience.”
– Thrifty Vinyl blog

“I’ve written about it before and I’ll write about it again, not least because you cannot really call yourself a rock writer if you haven’t written at least 15,000 words about the damned thing, which – here I go again – is an intense collision of surreal object, hate letter, emotional outburst, poetic assault, bubblegum serialism, artistic bombshell, infected ambition, celebrity breakdown, creative exhaustion, sinister confession, nervous tension, practical joke, artistic tantrum and psychedelic documentary.”
– Paul Morley, The Guardian, 2010 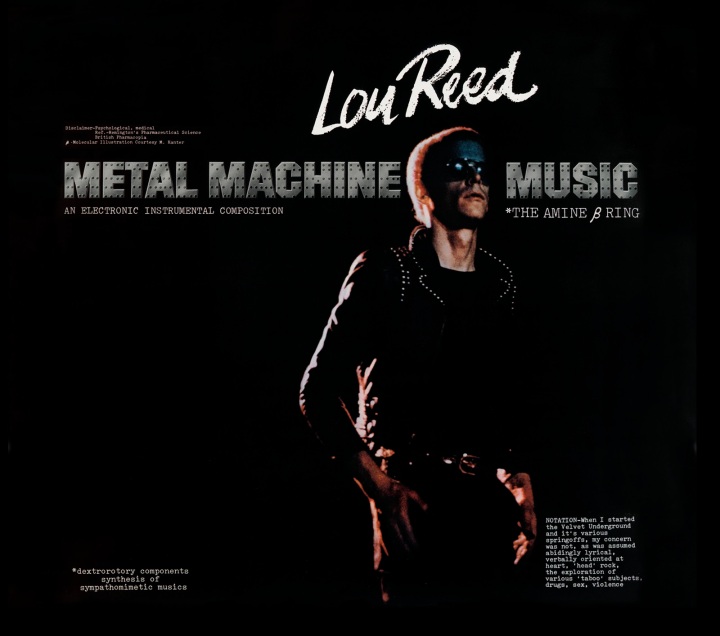 “The pleasures were there, if you only trusted the artist: La Monte Young’s Theater of Eternal Music Dream-House in your own home, and without all the phoney number-mysticism. But most fans and rock critics were unwilling to buy into such High Art justification. Other explanations proliferated for why Reed would choose to release MMM, two favourites being the revenge-on-the-record-company theory and the getting-out-of-a-management-contract theory.”
– Mark Sinker, “Contract Breakers,” 2007 (The Wire)

“In its droning, shapeless indifference, Metal Machine Music is hopelessly old-fashioned. After a decade of aesthetic outrages, four sides of what sounds like the tubular groaning of a galactic refrigerator just aren’t going to inflame the bourgeoisie (whoever they are) or repel his fans (since they’ll just shrug and wait for the next collection). Lou Reed is disdainfully unveiling the black hole in his personal universe, but the question is, who’s supposed to flinch?”
– James Wolcott, Rolling Stone

“I just think it’s one of the most remarkable pieces of music ever done by anybody, anywhere. In time, it will prove itself.”
– Lou Reed, quoted in Victor Bockris’s Transformer: The Lou Reed Story

reassuringly repetitive, without a single sound other than tape hiss about 1500 Hz, whereas MMM is as abrasive and unmelodic as possible, with almost nothing below —

and yet they occupy two ends of what was at the time a pretty new axis — music as immersion, as sonic experience in which you float.

“As a teenager MMM had summarised for me all the things I loved: modern orchestral music, free jazz, industrial music, heavy rock and feedback. I heard it as a guitar orchestra version of ‘Xenakis-and-likes’ and fantasised about setting it for orchestra. It took me more than 20 years to make this dream a reality: I’ve now done performances of MMM with five different ensembles in various countries, continuously revising and refining my transcription and arrangement each time.”
– Ulrich Krieger: Unclassifiable (The Wire, Nov. 2013)

“Most of you won’t like this and I don’t blame you at all. It’s not meant for you. At the very least I made it so I had something to listen to. Certainly Misunderstood: Power to Consume (how Bathetic): an idea done respectfully, intelligently, sympathetically and graciously, always with concentration on the first and formost goal. For that matter, off the record, I love and adore it. I’m sorry, but not especially, if it turns you off.”
– Lou Reed, liner notes to MMM

That MMM is now living and breathing as an enduring, taunting piece of contemporary composition means that Lou is on the way to having the last laugh (another of his favourite things). Not so much because Metal Machine Music is, after all, an elaborate conceptual joke, but also because – and I’ve said it before and I’ll say it again – it is not. It is, unless being a rock critic I am entirely wrong, quite an insight into the turbulent spirit of the age.”
– Paul Morley, The Guardian, 2010

JD: I tell you what though I’ve found myself listening to it in the bath a few times this week and it’s been quite relaxing. It’s not something I could imagine doing with the original.
LR: Well, yeah… What are you listening on headphones?
JD: No, on speakers.
LR: What kind of speakers could you possibly have in your bathroom?
– Lou Reed interviewed in Metal Machine Music Revisited, by John Doran in Quietus

“Later I came to understand that Lou took the rejection of it by fans and press alike very personal. This piece was a serious piece of love – love of sound and the guitar. Even more so, MM3 came as a late artistic confirmation. He had been right all along. MMM had come home. Completely unexpected by him, a younger generation of musicians and listeners now got it. At 2009’s Lollapalooza MM3 played a ten minute noise interlude between well known Reed songs to the frantic cheers of a large audience.”
– Ulrich Krieger: Unclassifiable (The Wire, Nov. 2013)

“What’s most distressing is the possibility that Metal Machine Music isn’t so much a knife slash at his detractors as perhaps a blade turned inward. At its very worst this album suggests masochism.”
– James Wolcott, Rolling Stone

“It was great, great fun. I was trying to do the ultimate guitar solo. And I didn’t want to be locked into a particular drum beat, or pattern or a particular key or beat that was the idea. Just guitars, guitars, guitars.”
– Lou Reed interviewed by John Doran in Quietus

“As way of disclaimer.I am forced to say that, due to stimulation of various centers (remember OOOOHHHMMM, etc.), the possible negative contraindications must be pointed out. A record has to, of all things Anyway, hypertense people, etc. possibility of epilepsy (petite mal), psychic motor disorders, etc… etc… etc.

“My week beats your year.”
– Liner notes to MMM