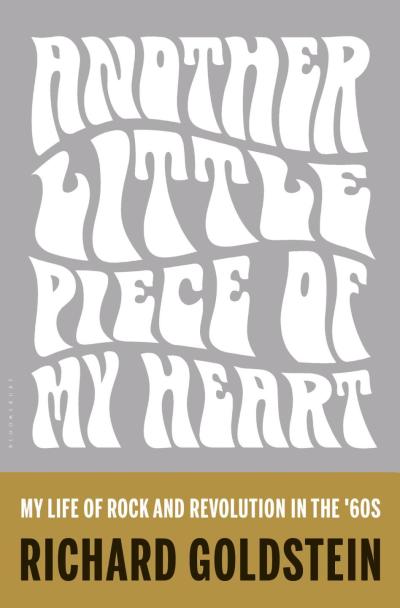 “Who was the first?” continues apace as one of the more boring and unanswerable questions regarding rock criticism, but if anyone can rightly claim the title, it’s Richard Goldstein (unless it’s Jane Scott or Paul Nelson or…), whose “Pop Eye” column turned up in the Village Voice music section in 1966, some years before the Village Voice even had a “music section” to speak of. Never, by his own admission, the sort of critic’s-critic who would end up dominating Voice music coverage under the guidance of (his longtime compadre), Robert Christgau, Goldstein fashioned a criticism modeled on literature, albeit a literature imbued with fannish enthusiasm and revolutionary fantasies. Another Little Piece of My Heart, Goldstein’s recently published memoir of the ’60s, is a great read — a clear-eyed attempt not to explain but to begin to try and grasp a period of personal and social turbulence and joy and heartbreak. On June 17, I talked with Goldstein for just over an hour, about the book and about his relatively brief (three-four year) stint as a rock critic. (Visit Richard Goldstein’s website for further information about his work, including his original Sgt. Pepper review, a gallery of period photos, and a preserved copy of his televised interview with the Doors.)

Part four (Velvet wedding; kids these days; coming out at the Voice…)

One thought on “Interview with Richard Goldstein”